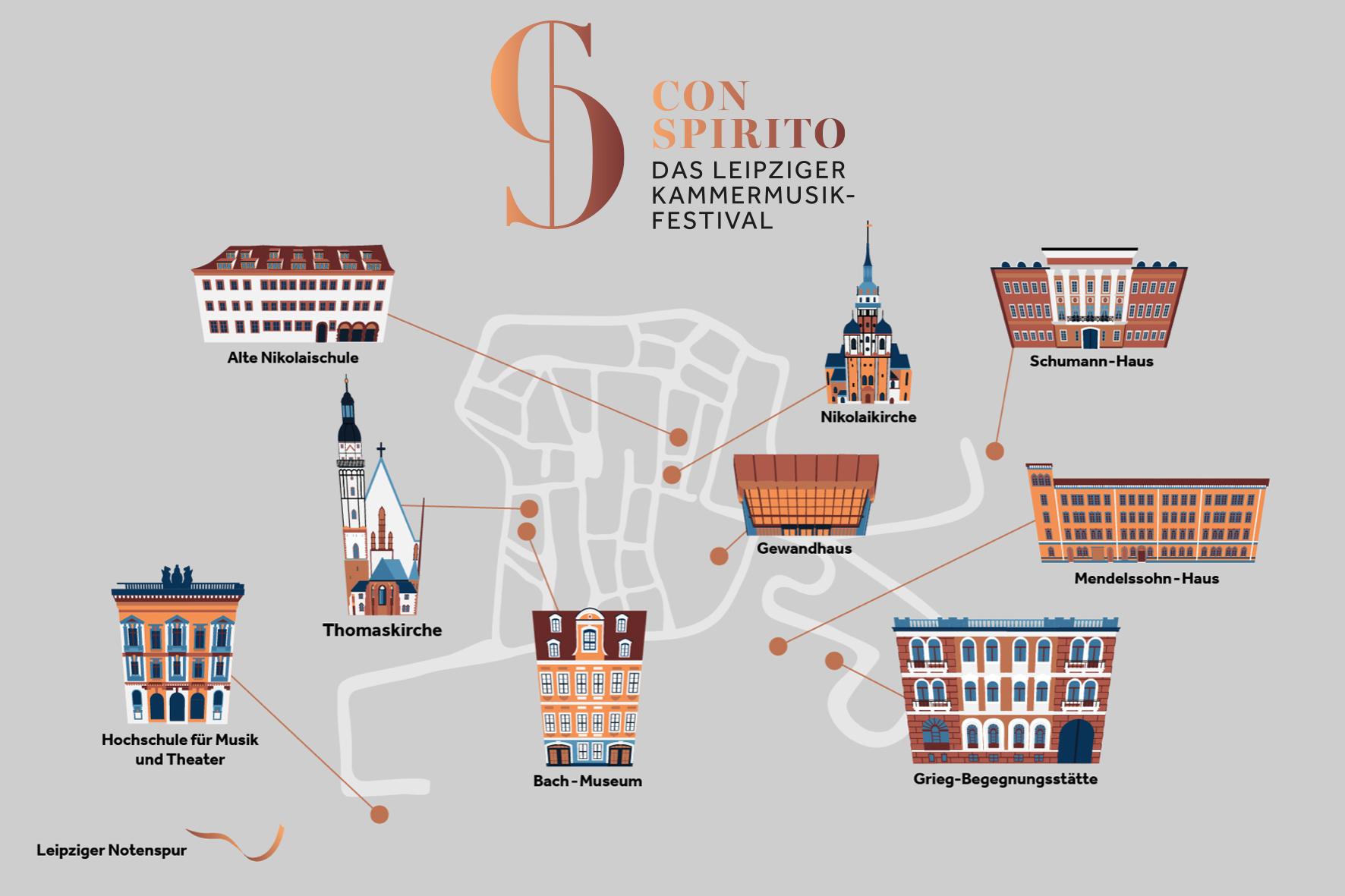 Where Music is at Home!

The sound of Leipzig, which has always been a town of music, will be dominated by renowned stars of international chamber music from September 11 to 19, 2021. The first edition of Leipzig’s chamber music festival Con spirito adds yet another highlight to the cultural calendar of Saxony’s cultural metropolis. The audience can enjoy music at the authentic places where it was created, undertaking a journey to the European Cultural Heritage sites, the salons and workplaces of Felix Mendelssohn Bartholdy, Johann Sebastian Bach, Edvard Grieg, Richard Wagner as well as Clara and Robert Schumann. In varying formations, Daniel Hope, Antje Weithaas, Martin Helmchen, Marie- Elisabeth Hecker, Alexander Melnikov, Eckart Runge and many other artists will perform. Peter Bruns, who also makes several concert appearances, is the festival’s artistic director. The concert series focuses on composers who had a decisive influence on Leipzig’s music tradition.

The large chamber music form of the octet provides a programmatic framework for the eight concerts of the Con spirito festival. It opens with a performance of Niels Wilhelm Gade’s String Octet Op. 17 on September 11 at the Gewandhaus – the very place where the Danish composer led the orchestra as Felix Mendelssohn Bartholdy’s successor. The latter’s Octet marks the conclusion of the one-week chamber music series on September 19 at the Academy of Music and Theatre “Felix Mendelssohn Bartholdy”. The concert takes place in cooperation with the European Chamber Music Academy.

The only solo recital of the Con spirito festival will be given by Daniel Hope at the Thomaskirche (Sept. 15). The violinist dedicates his appearance to Johann Sebastian Bach, illuminating the oeuvre of his contemporaries as well and emphasizing the master’s power of inspiration, which is echoed in compositions by Alfred Schnittke and George Rochberg, for example. Con spirito breathes the spirit of Leipzig – a city whose creativity is reflected in a wealth of cultural institutions unparalleled throughout the world. Consider the founding of the Thomanerchor, the Choir of St. Thomas, Johann Sebastian Bach’s work in the city and the development of the first concert orchestra supported by middle-class society; over the course of the 19th century Leipzig developed into one of the most important cultural metropolises in Europe. The authentic places which allowed Leipzig to grow into a world-class city of music were awarded the European Cultural Heritage Label in 2018.

Leipzig’s musical heritage sites include nine outstanding institutions devoted to music history and the musical present: the churches Thomaskirche and Nikolaikirche, the Nikolai School, the Bach Archive, the Mendelssohn Haus, the Academy of Music and Theatre “Felix Mendelssohn Bartholdy”, the Schumann- Haus, the C. F. Peters Music Publishing House with the Grieg Memorial Site and Leipzig’s Gewandhaus. These locations are united by a music trail known as the “Leipziger Notenspur” and the chamber music festival Con spirito.