History of the house

Happy years of being married on the Inselstraße

Clara and Robert Schumann spent the happy first four years of their marriage in the house on Inselstraße 18, constructed in the neo-classical style in 1838 by Friedrich August Scheidel. On her 21st birthday, the newlyweds moved into their first shared domicile in an emerging new district, which was to become the center of the book trade. Numerous publishers and book printers settled here, including Breitkopf & Härtel and C.F. Peters as well as F.A. Brockhaus and Reclam.

The creative couple regularly welcomed famous personalities such as Felix Mendelssohn Bartholdy, Franz Liszt, and Hector Berlioz. Robert Schumann composed some of his major works here in the Inselstraße, for example the Liebesfrühling (Spring of Love) op. 37, together with Clara, the Spring Symphony op. 38, the Dichterliebe op. 48, and his Piano Quintet op. 44, which his wife premiered at the Gewandhaus.

Together with the independent elementary school “Clara Schumann”, the Schumann-Verein e.V., and the Rahn Dittrich Group, who had saved the house from dilapidation in 1999, a unique symbiosis of museum, event location, and a place of education has been formed.

For the Festival Year CLARA19 the Schumann-Haus presented its new museum concept in cooperation with the curator Beatrix Borchard and Karsten Blum (exhibition design). 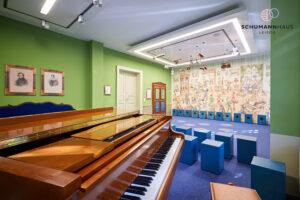